First, Amsterdam is like a VVS diamond; pretty close to flawless.

“i am amsterdam” sign in front of the Rijksmuseum

Built around canals, the mostly brick four-to-six story city is fastidiously clean without being sterile. It’s Venice without the 400 years of (charming?) decay or Paris with the vibrant mess of neighborhoods but less the insane traffic and pollution. Throw in the massing hordes of cyclists and great restaurants and you could argue Amsterdam is Copenhagen-esque, too. It’s a city that reminds you of of the best parts of everywhere you’ve already been. 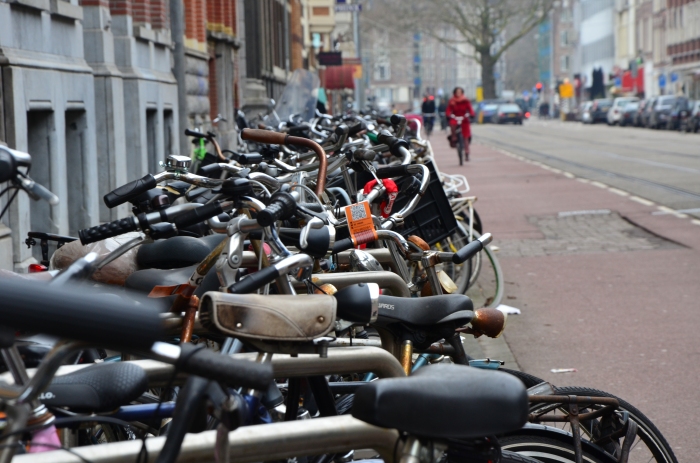 With that in mind, and having viewed the pictures on the hotel’s website, I had high hopes for our stay. I was not disappointed. Straddling a quiet street, the hotel consisted of several completely different, but beautiful, buildings and it had an immediate luxury boutique hotel vibe.

All the buildings until the end of the street comprise the hotel, along with…

That vibe ended once we were in the vast lobby which seemed like any corporate atrium, but the glass ceiling allowed for much natural light, which was pleasing. Rooms on upper floors had windows directly facing the lobby and I assume their occupants felt similarly.

We arrived around 3 hours before the normal check-in time of 3pm, so our room was not yet ready. We were able to leave our bags with the concierge and he, in turn, left us with a a fantastic recommendation for lunch – an Dutch deli that would (honestly) be worth a Sunday Times writeup. We walked around Amsterdam for a couple hours and then returned to the hotel to check in.

I’ve always wondered what it would be like to live on a houseboat.

I had booked a Standard Room for two nights with 50,000 Club Carlson points earned from the signup bonus on my Club Carlson credit card. Normally, two nights at a Category 6 Radisson BLU would cost 100,000 points, but cardholders are given the last night free as a membership benefit. Additionally, I had communicated with the hotel beforehand and told them I had two family members with me, and they assured me we could buy up to a Junior Suite, since there wasn’t a standard room with 3 beds. The Junior Suite was an additional 70 euros a night and the rate included breakfast for everyone in the room both days. This turned out to be an insane deal.

To get to the suite, we had to walk downstairs, cross via a subteranean level underneath the street and then take an elevator to yet another building that made up part of the hotel. The suite was grand, with at least 14-foot ceilings, a luggage area and three massive windows.

My sister and I had two single beds, which were both very comfortable. The pullout couch which seemed to suit my dad just fine.

The bathroom had plenty of toiletries and towels and the tub/shower was American style, with a full-size curtain and a showerhead that was fit for folks 5’5 and above (showers can be set up in the weirdest ways in Europe, even in nice hotels).

These were really nice products.

We also had unlimited, complimentary access to the room mini-bar, including all alcoholic drinks and water. I don’t know if this is a normal Radisson BLU perk, but it was super.

Minibar underneath the TV.

The room was fantastic, but the best part of the hotel, however, was the breakfast buffet in the hotel restaurant De Palmboom. With a mixture of Dutch and American foods, it seemed like a typical spread – lots of cured fish and meat, pastries, breads, juices, yogurt and nuts. But it seemed that the food was hot out of the oven fresh – like every single item.

We were bowled over by the food quality and dawdled both mornings for a meal we usually don’t. My favorite combination was the pickled mackerel – a Dutch specialty – on a warm, thick-cut farm-style wheat loaf with some goat cheese as a spread topped with sliced cucumbers. Lord, it was fine. There were also several kinds of fresh-squeezed juice and the waitstaff even refilled drinks, which is like pulling teeth, sometimes, in Europe.

I went to the gym one of the days, as well, and they had several decent machines, a full rack of free weights and a spinning bike which is A-level for Europe, in my opinion. I took some pictures with my phone, but, unfortunately, lost it on a train to Antwerp.

When it was time to leave, check-out was quick and everyone at the front desk was extremely polite, just as they had been at check-in. It couldn’t have been a more agreeable stay and I would love the opportunity to stay here again someday.

The world. For less.

Everything about travel rewards programs and better travel.